New technologies go through all the same phases. They start with prototypes, move on to experimentation and finally arrive on the market for large-scale diffusion. Before investing, it is important to be clear at which stage of the growth process the innovation is at, to assess risks and opportunities correctly. Let’s see what is meant by maturity levels and at what point in the path Artificial Intelligence finds itself.

Technology maturity: what it is and what the levels are

Immediately after the first experiments in the laboratory, every innovation goes through phases that range from knowledge of the innovative features to full awareness of its use. Initially, few people will approach the new technology, but adoption will become increasingly widespread as its potential is understood.

A bit like what happened with the cell phone. A lot has happened, from the first model on the market to today’s latest generation of smartphones. Many initial features have transformed as people interacted with the technology themselves. For example, there was a need to implement the camera, expand the screen, and so on. The same goes for Artificial Intelligence.

In general, the level of technological maturity refers to the TRL (Technology Readiness Level) originally developed by NASA and used to assess the degree of technical maturity of a technology, based on the progress of development phases. Obviously, it starts with prototyping and then moves to the testing phases that precede market entry.

Gartner has outlined a model of technological maturity that companies can refer to understand in which phase Artificial Intelligence is and how to adopt it in processes and activities linked to their own business. 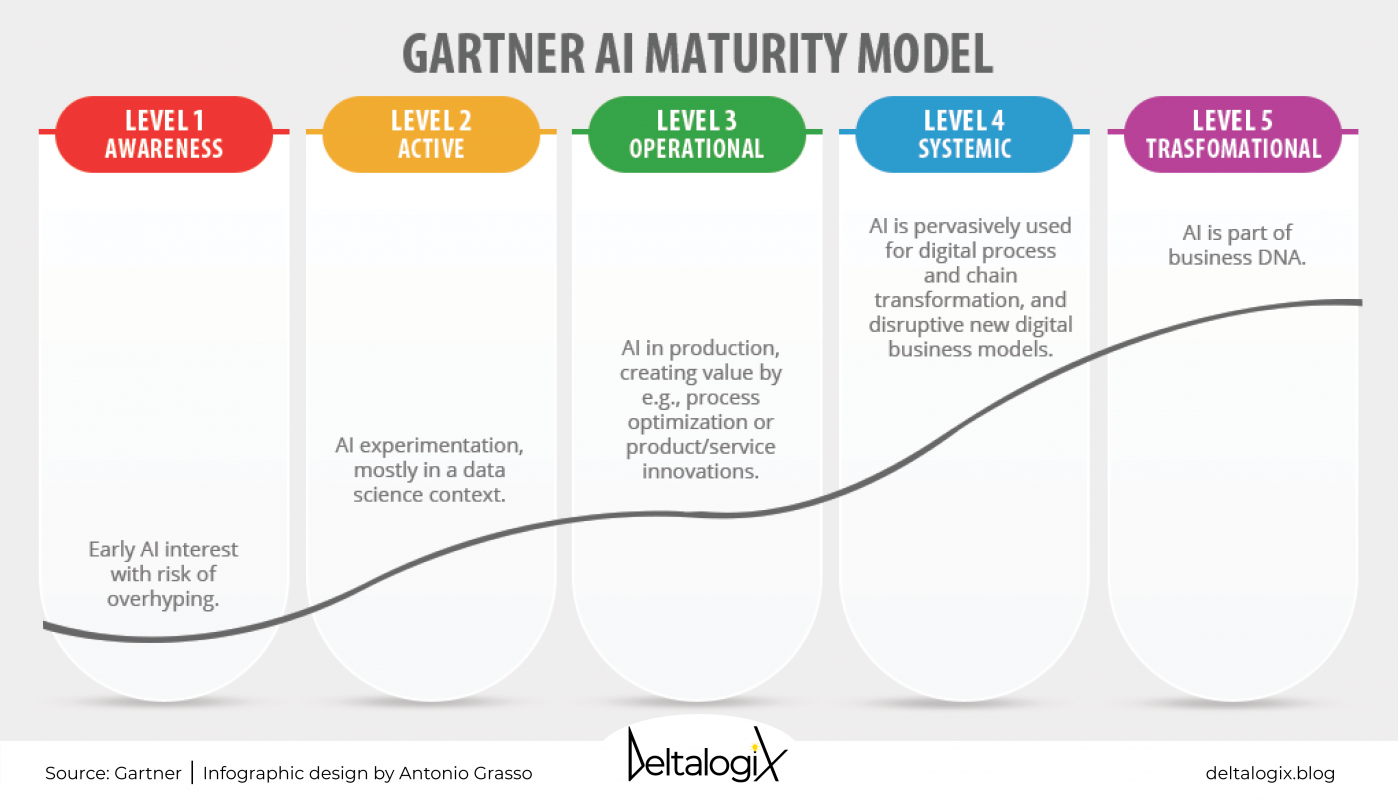 Becoming aware of new technology means becoming interested in it and imagining its many hypothetical applications. We are still at an early stage, where the risk of overestimating an innovation is high.

We remember, for example, the scientist and founder of modern computer science Alan Turing. In one of the first articles published on AI, “Computing machinery and intelligence,” he claimed to be able to define intelligent a machine when its behavior was indistinguishable from the human one. A challenge that still today we cannot define concluded.

In fact, in the embryonic phase of a technology, the application side is secondary because the focus is on developing all the potentialities related to innovation. It is, therefore, scientists who are active at this level. At the same time, the technology is little known and widespread, resulting in high market entry barriers.

In general, as the level of maturity increases, the investment in research and development (R&D) and the associated new possible applications to be discovered are increasingly reduced. We then move out of the R&D context and academic experimentation.

The progress of Artificial Intelligence was, and still is, closely linked to that of computers. In fact, a strong acceleration occurred between the ’60s and ’70s, when computers became faster and improved their functions: in addition to executing commands, they were also able to store data.

Data has always been the fertile ground of AI that was born to simulate human reasoning made of decisions taken based on numbers and values.

The first experimentation of AI involved Data Science, or rather those contexts in which data is collected and managed. Among numbers, values, and inputs of various kinds, its contribution allowed to classify, manage and transform raw data into useful information for analysis and future predictions. These functions today generate a huge advantage for companies. In this regard, I recommend you read as an in-depth “Data Science: how to transform data into value for the company.”

Today, Artificial Intelligence is in the middle of the operational level and is about to enter the systemic level. But what are the other levels and what are the future prospects? Click To Tweet

Level 3: The operationalization of AI to innovate processes or products

In the operational phase, the technology takes a further step forward and, from experimentation, enters the heart of organizations: production. The entry into the Artificial Intelligence market was with R1, Digital Equipment’s first Artificial Intelligence system, created to configure computer orders. Thanks to an algorithm that allowed for simplified and automatic computer startup, the company saved about $40 million in one year.

Since Artificial Intelligence has entered factories, people have started talking about “Intelligent Industries.” These are realities where the adoption of AI has populated the manufacturing sector with intelligent machinery that learns and acts autonomously. In fact, machine learning, which is possible thanks to Deep Learning and Machine Learning, has allowed organizations to enter the field of Industry 4.0.

Level 4: A systems approach and the creation of new business models

Currently, Artificial Intelligence is in what Gartner calls the operational level. In fact, there are few contexts where we are beginning to see a global orientation to its adoption in the enterprise. The systemic approach to technology occurs when it has become accessible to everyone. Or rather, when in the company, AI does not just support individual actions or departments but involves digital supply chains and processes, creating new business models. This approach will require a reinvention of roles and responsibilities. We could say that this path is concluded when, on the wave of these changes, the way of thinking and working of resources will also change.

Level 5: The Future of Artificial Intelligence

In the last level, technology does not enter companies by improving a process or department but becomes the foundation for building new models, processes, and activities. They are in what Gartner calls the transformative level of the AI maturity model. A stage that provides a huge competitive advantage.

Artificial Intelligence, at this level, we cannot call it innovative but consolidated, just as is the case with mobile today. We are no longer surprised that we can receive phone calls anywhere; we panic when the opposite happens. This means that we take all its functions for granted, and we plan our activities knowing that we can answer an email or send a report anywhere.

We are not there yet with Artificial Intelligence, but it is a technology that is progressing rapidly. The future outlook is that soon AI will become indispensable for all organizational realities. 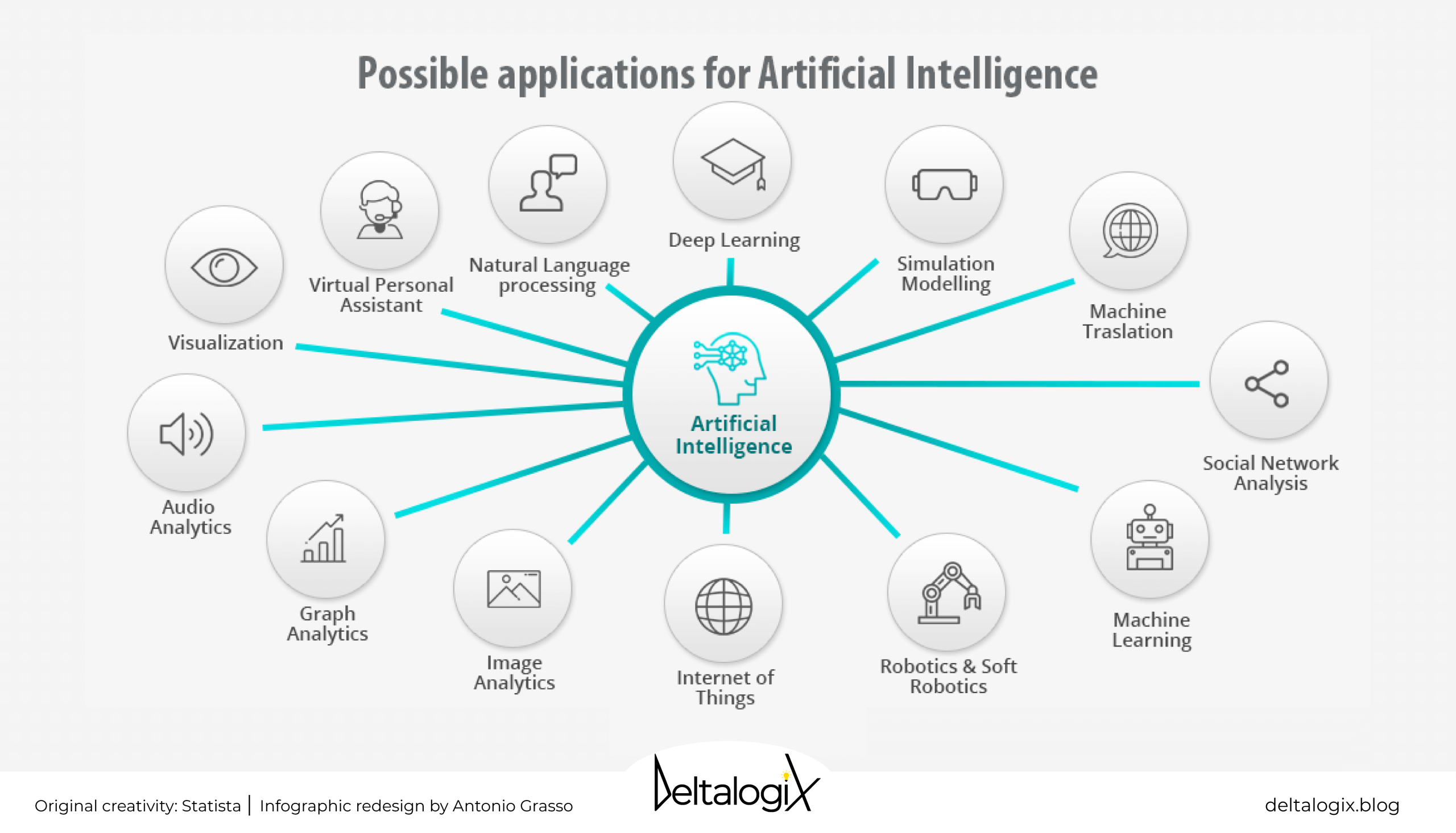 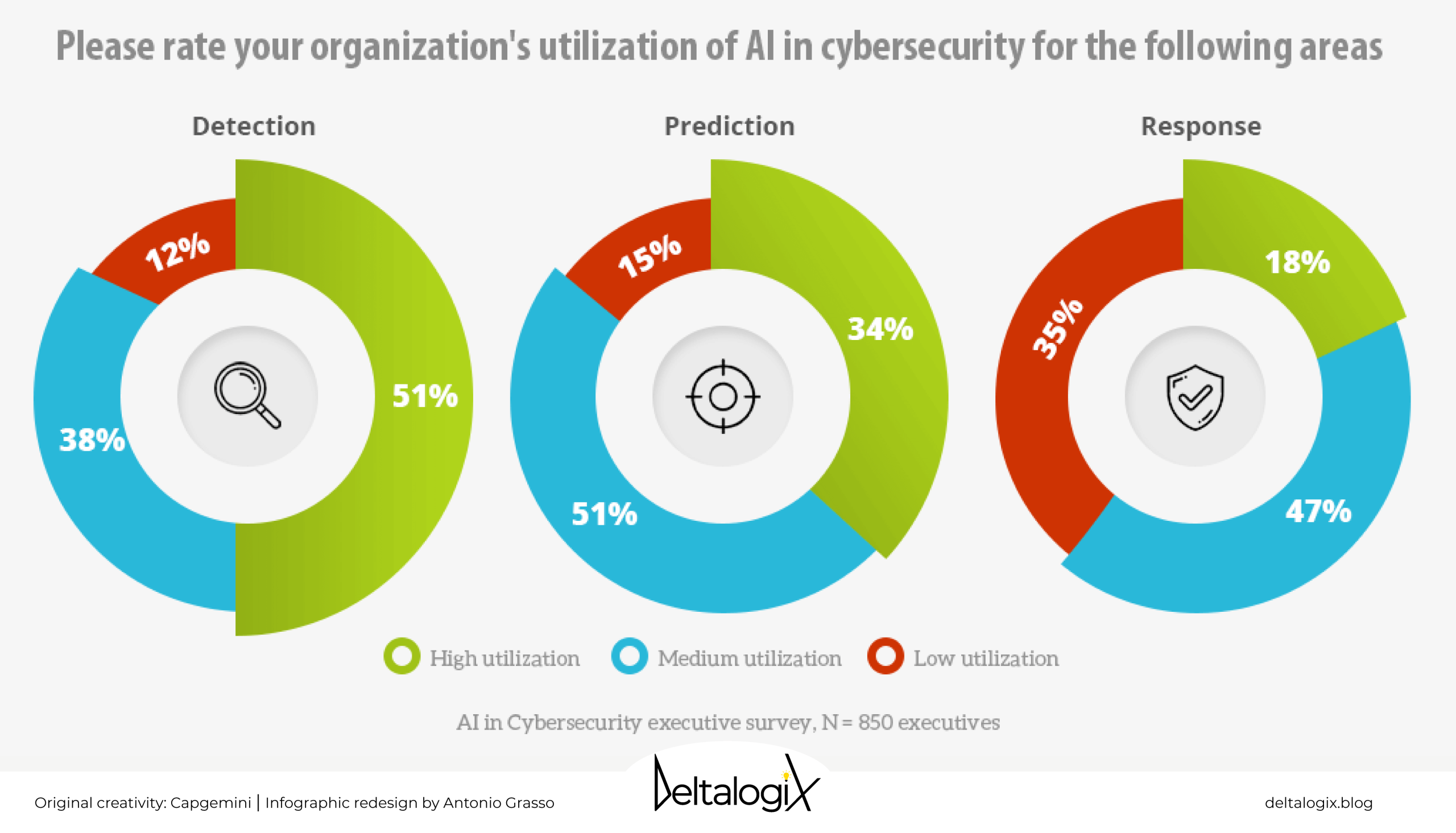 Artificial Intelligence and Cybersecurity as a shield to protect data