The Metaverse is not only the entry into the virtual world linked to entertainment but has potential, still unexplored, that could change our social interactions. Digital would allow us to act without intermediaries and recreate a society in which we can be active citizens. Let’s see how.

A new society in the Metaverse

Imagining the metaverse only as a virtual social network precludes us from the possible changes it could generate in our social, political, and economic order. For his part, Mark Zuckerberg has unveiled the science fiction side of the Metaverse – a virtual world where users can interact, game, and experience things as they would in the real world. But what lies ahead is much more than that.

In virtual reality, the starring role will be given to blockchain technology, which could pave the way for a decentralized autonomous society. Anything but a state of anarchy, this model would allow us to become global citizens with our digital identity and will enable us to create our economies without the need for intermediaries. More than a fascinating thought experiment, decentralization is a lever that, when pulled, could give way to unprecedented changes for our social and economic order.

In this article, I want to focus on the technologies and innovations that are driving our post-digital turn. The ones that will lead us toward identity, ownership, transactions, and “direct democracy” – direct participation in government decision-making.

A future without intermediaries: Blockchain and tokenomics

How does Blockchain manage to provide us with the same guarantees as intermediaries? Blockchain acts as a secure, decentralized, and transparent data container. The information it stores is protected by cryptography – i.e., a unique string of numbers that link various blocks and that is virtually impossible to crack. In this way, transactions can be fully controlled without intermediaries.

While its role in the metaverse is to guarantee that data is reliable, blockchain also allows us to perform transfers of value and gives proof of the digital ownership of assets. After all, these cryptographic techniques have paved the way for what we know as cryptocurrencies.

Thanks to smart contracts – the business process enablers for blockchain – these same innovations have given rise to digitized, decentralized autonomous organizations (DAO). Although they function like paper contracts, smart contracts are agreements between counterparts that are self-executed, pre-programmed, and written into lines of code (click here to learn more about smart contracts).

In the future, in the Metaverse, the role of citizens will change thanks to the Decentralized Autonomous Society (DAS), which will allow organizations to operate autonomously and decentralized Click To Tweet

Technically speaking, the purpose of a DAO is to encode an organization’s operational rules into a computer program (or smart contract) to maintain transparency and avoid the need for the intermediation of a centralized body. From a series of pre-set rules, DAOs allow users to digitize not only transactions but an organization’s entire functioning.

For instance, in Italy, we have a public automobile register, which is a database that contains all the registrations, transcriptions, and annotations relating to motor vehicles and tractor-trailers. This register is managed by the ACI (Automobile Club of Italy): an official body that aims to guarantee compliance with the regulations set by the legislator. Since ACI officials do not have the right to change the rules – because they can be changed only by legislators – it acts as an interface between citizens and a database. This is but one example of an organization whose sole purpose is to act as a guarantor.

If the registry were digitized with a DAO, we could radically streamline administrative processes. By transforming legal rules into smart contract clauses, we could allow citizens to register independently, improving efficiency and eliminating the bureaucracy associated with procedural flows.

Of course, DAOs were not conceived of to simply replace government agencies and reduce paperwork. To the contrary, the DAO model began to explode worldwide after a series of private initiatives began to flourish. Personally, I had the honor of serving on the advisory committee for AgriUT – an independent and non-profit organization that uses technologies to transform smallholder agriculture.

By creating a global ecosystem of rewards, the AgriUT token, secure payments can flow without intermediaries. In this way, small farming communities around the world will be able to build their local economy. Indeed, they will be able to connect with agricultural suppliers, financial service providers and buyers, making secure and reliable transactions thanks to blockchain.

The creation of a Decentralized Autonomous Society

More broadly, if we can combine DAOs in ways that satisfy the many needs of citizens and businesses, we could see the birth of a decentralized autonomous society (DAS): a cooperative and interoperable aggregator of various decentralized and autonomous organizations. 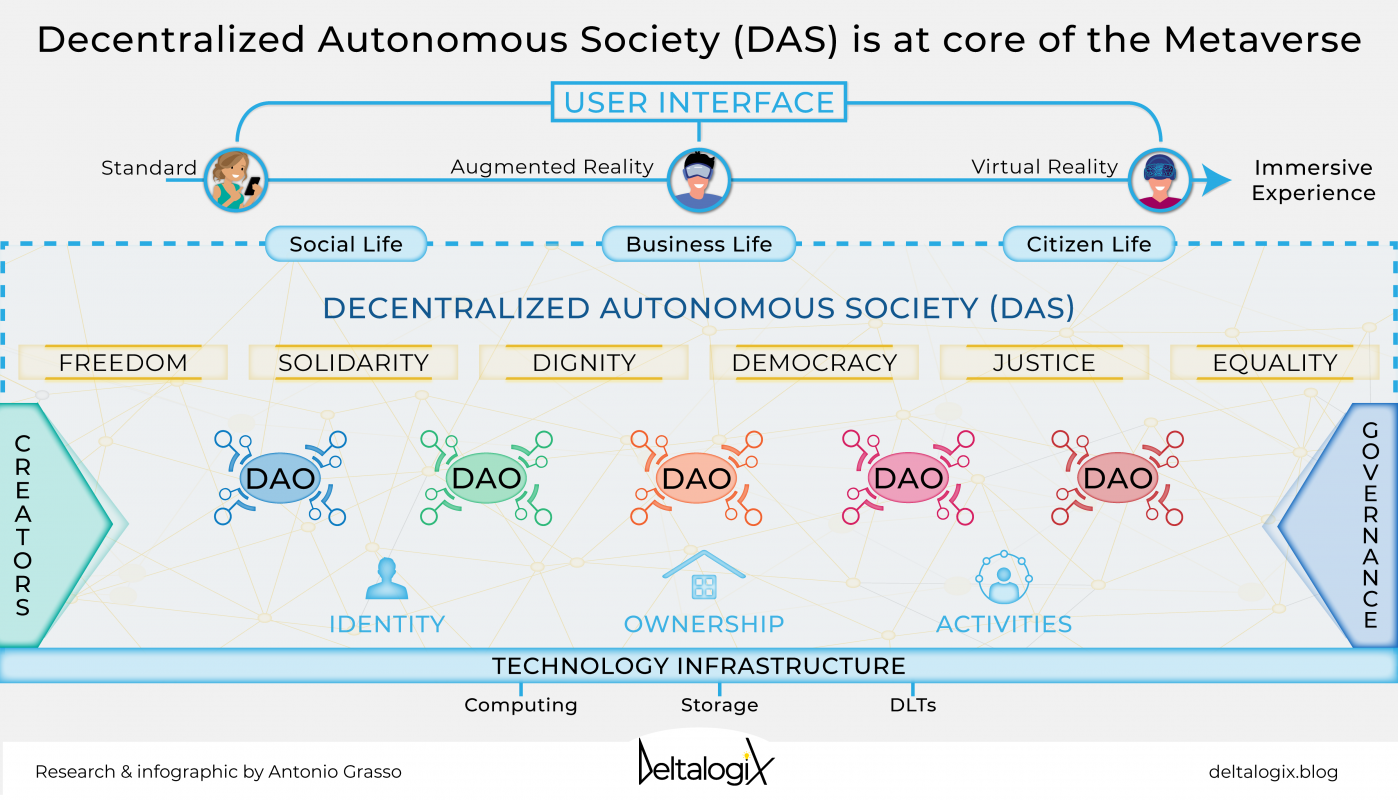 At this point, you may be wondering why I’m talking about DAOs and blockchains in an article that is supposed to focus on the metaverse. While the latter harnesses virtual reality for a new mega video game, it also opens the doors to the society of the future – one that is shaped digitally and that functions via algorithms. Data and encryption will become markers of confidence, identity, and transparency.

Punctuating the point, what many visionaries refer to as a “post-digital society” is already taking shape. I see the metaverse as the gateway to a giant set of interconnected, interoperable, and interdependent algorithms. Such a doorway will allow us to digitize our society and economy from the very beginning.

But what will we gain from all of this?

Apart from connecting with virtual reality and living a much more immersive experience than today’s smartphones enable, the real gain is in autonomy and independence. We will take the stage as actors, rather than as mere spectators.

Creator Economy and Global Citizens: the role of people

Accessing the metaverse will allow us to take part in the creator economy, where we will possess digitized assets (non-fungible tokens – NFT); have a strong and legally recognized digital identity; and will leave bureaucracy behind.

Our role as citizens will also change. In the virtual world, national borders lose their meaning and – as we become detached from hierarchical structures and territorial bureaucracy – we will transform into global citizens who adopt a more cosmopolitan ethic. Living in a single world that is interconnected, interdependent, and without intermediaries carries its own set of rules, but they can be approved of at the individual level.

What seems like a digital dream could quickly turn into reality. 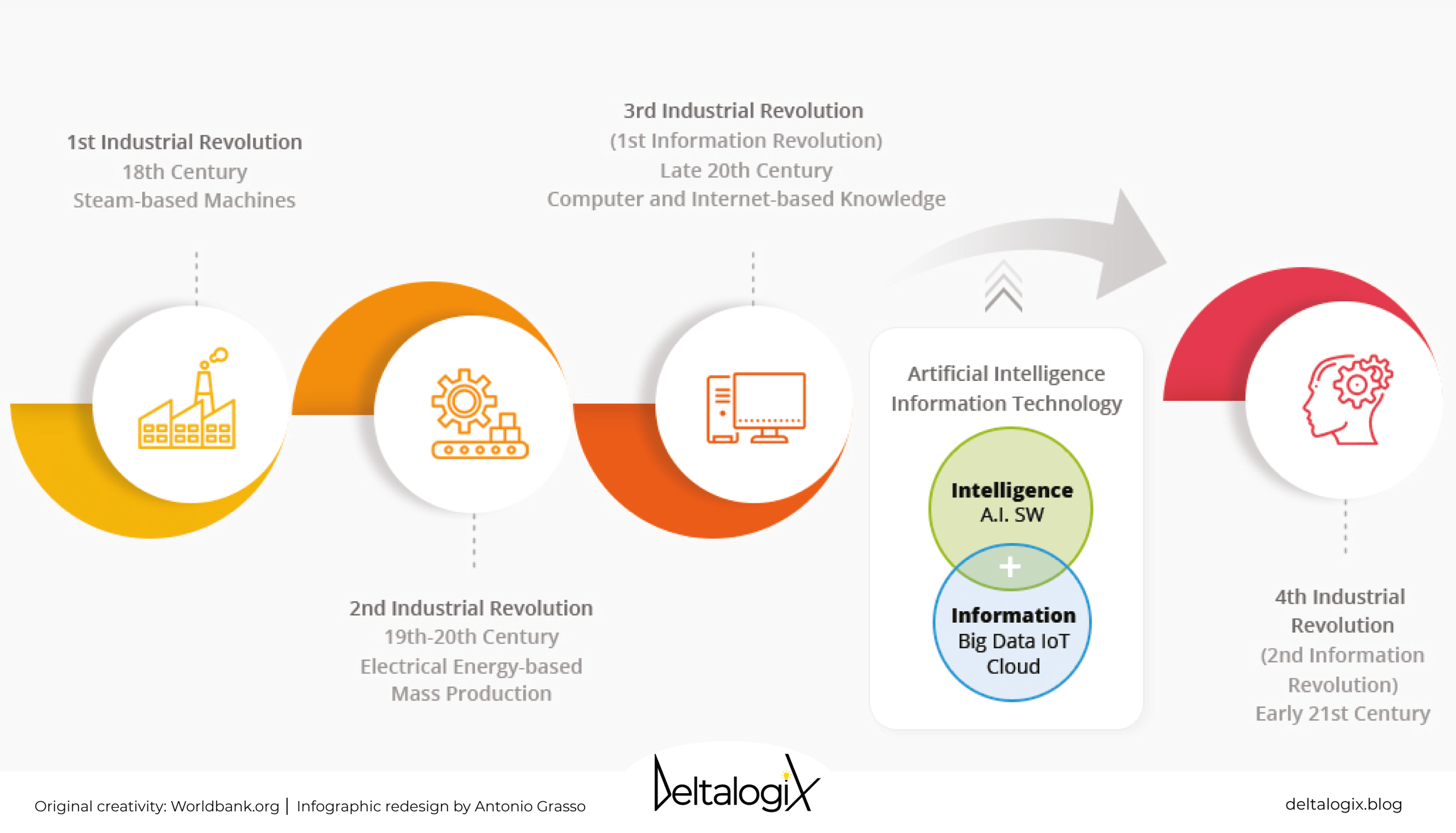 Industry 4.0: the innovations of the Fourth Industrial Revolution 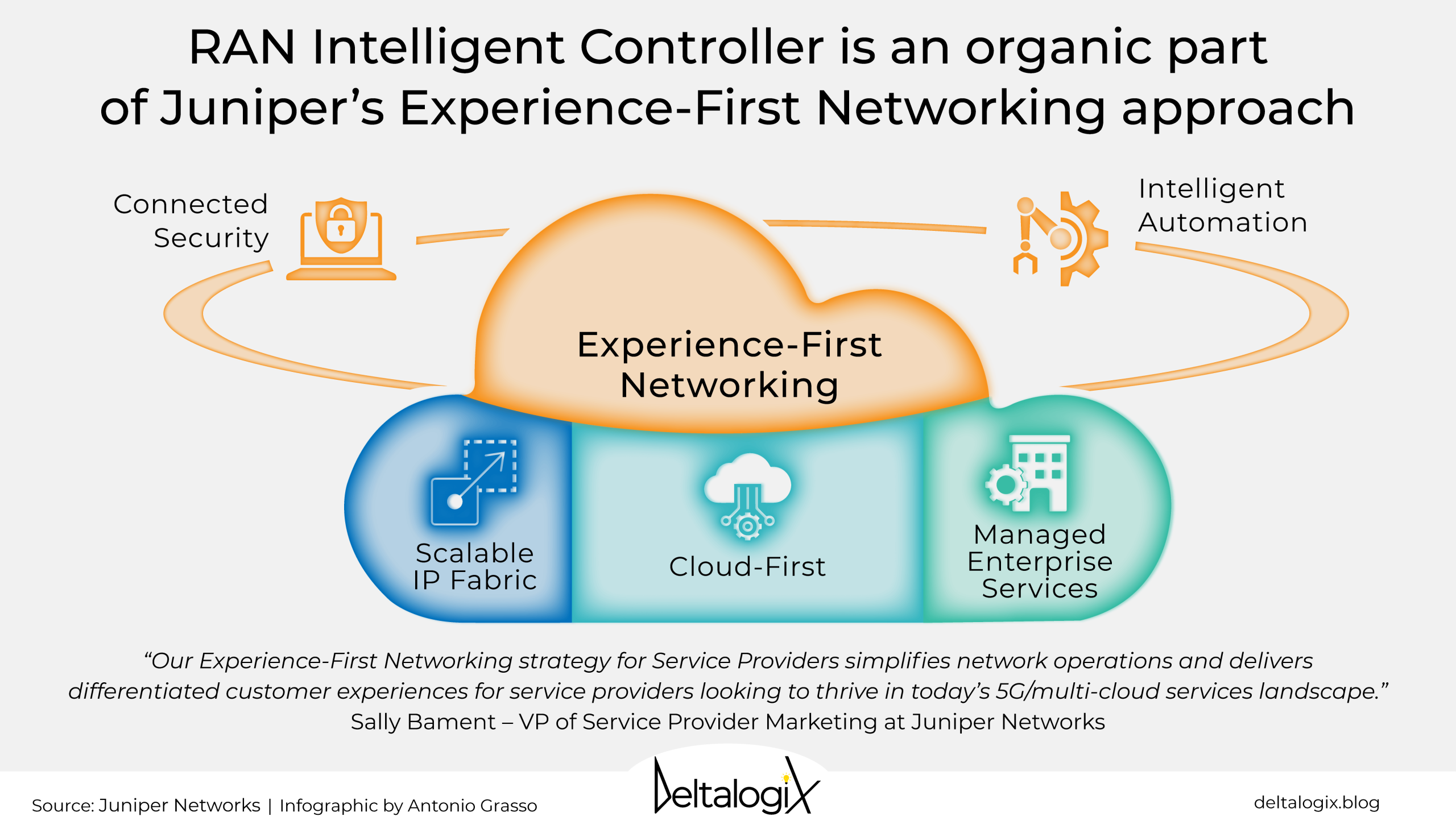