Who wouldn’t like to sit in their car and be driven to their desired location without lifting a finger. The trip could then be used to read, or to relax before starting a busy workday. Unfortunately, however, fully self-driving cars, for now, are only prototypes. The reasons are not only technological but also structural and bureaucratic. Let’s try to understand what the next steps of autonomous mobility will be.

What do we mean by self-driving vehicles?

Cars that move alone and silently through city streets are the image that usually our mind automatically associates with the phrase “self-driving vehicles,” but the field is not so narrow. The definition includes, in fact, all vehicles that, thanks to IoT and Artificial Intelligence, can move from one point to another autonomously, that is, without a driver.

This implies a perception of the surrounding environment, detecting objects or obstacles that the vehicle might encounter in the path, and programming that respects the road safety rules.

The design of an automated driving system (ADS) dates back to the 1950s, but Japan’s first true prototype self-driving vehicle was built in the 1970s. Since then, great strides have been made, also related to the rapid advancement of technology, and today there are many companies designing solutions for autonomous vehicle movement.

What are the levels of autonomous driving?

Between human-driven and autonomous vehicles, the Society of Automotive Engineers (SAE) has identified as many as 6 levels of driving automation: from fully manual to fully autonomous. Here they are in detail. 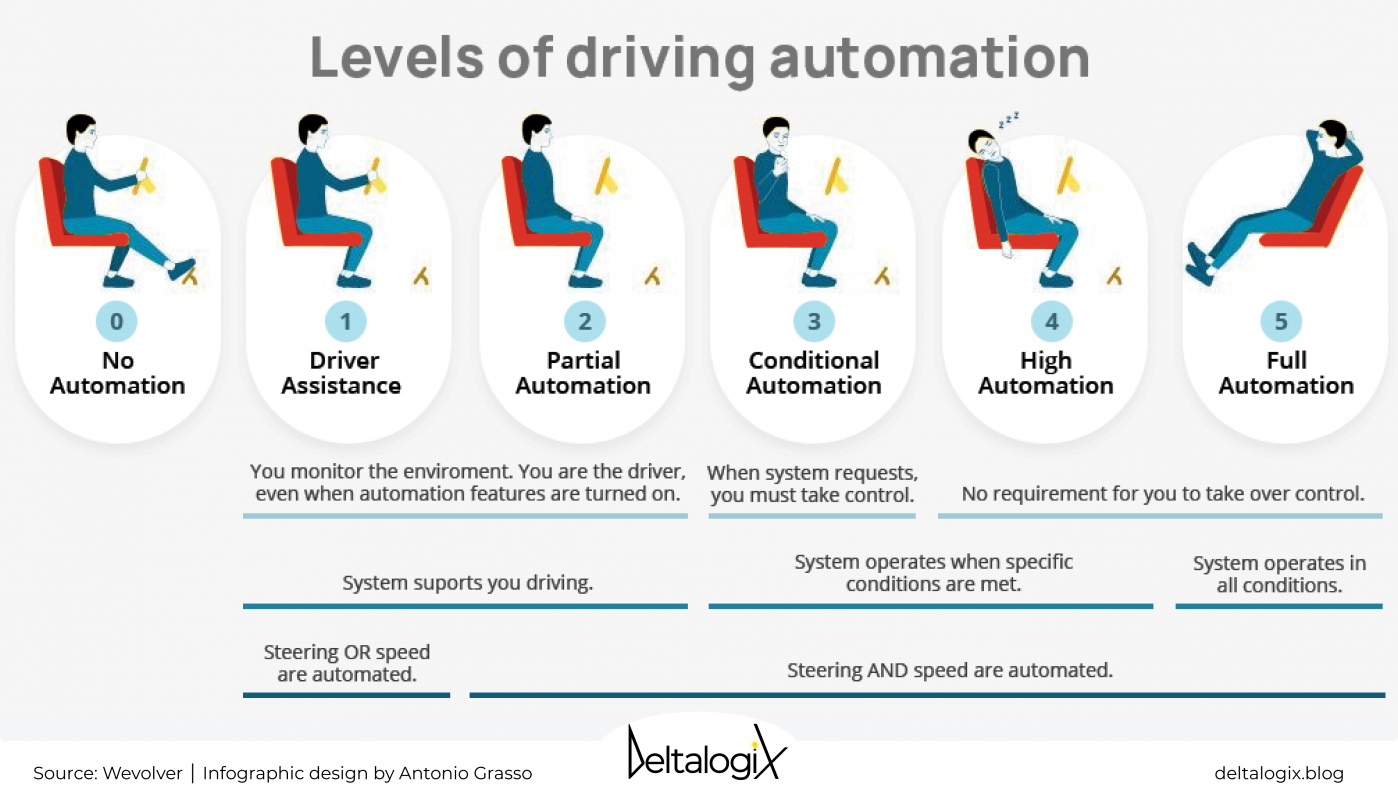 Fewer and fewer vehicles today have no driving automation at all because even basic models of recent cars have driving facilitators. Included in Level 0 are vehicles whose control is left entirely to the driver. Yet, there may be features that do not affect driving but provide greater road safety. One example is ESP (Electronic Stability Control), which intervenes in the event of skidding by regulating engine power and acting on the braking system of individual wheels.

The vehicle types that fall into level 1 have initial driving support. This is referred to as assistance and not automation because even if the support functions are active, the driver’s attention and reaction are required: steering, acceleration, and braking are required in situations where road safety requires it. An example of driver assistance functions is adaptive cruise control, with which it is possible to set a constant cruising speed or lane detection.

In level 2, we begin to talk about automation as the functions, even those previously named as examples, do not alternate but operate concurrently, allowing the vehicle to proceed autonomously. At this level, the supervision and prompt intervention of the driver are required in case of unexpected events. For example: if I am on the freeway, I can set the cruise speed to 130 with the cruise control and automatically activate the braking in case of an approaching vehicle and the return to the lane in case of skidding. These settings allow for automatic progress but do not change if the context changes. If there is an accident on my street, I will have to act to respond to the unexpected by regaining control of the car and disabling the automatic functions.

Autonomous driving is increasingly becoming a tangible reality thanks to Artificial Intelligence and IoT. All that's left now is to act on safety and infrastructure Click To Tweet

In level 3, the vehicle is able to detect many more details and elements of the surrounding environment than in the previous level, and this allows the transition from autonomous driving with supervision to driving without human control. The vehicle adjusts the acceleration and acts on the steering at the same time, and in case of unexpected events, it warns the human driver to take back control because the automatic system cannot manage that kind of action. An example of a Level 3 function is the Traffic Jam Chauffeur, i.e., the car slows down and changes lanes automatically in case of a traffic jam.

Automation in Level 4 allows the driver to take a break from driving. It will only need to set the destination and the car will proceed to activate the various functions of acceleration, steering, braking and safe driving. Driver intervention will only be required once the car has reached its destination to park or set a new destination. And what happens in case of an unexpected event? The vehicle will not require driver intervention but will stop until conditions return to optimal.

The last level is the one that does not require any intervention as the car is able to cope with the unexpected as well. In fact, the vehicle won’t be equipped with a steering wheel or pedals since there is no human interaction involved. We have not yet reached this level of automation, although the big car manufacturers are working on it. The hurdles, in this case, do not only concern the technologies or the input data needed for programming but also the road infrastructure and the regulations that guarantee road safety. One concrete example is Waymo One, a cab service using driverless vehicles, currently operating in the Phoenix suburbs.

Autonomous driving: what technologies and innovations are needed?

Enabling vehicles to move autonomously requires technologies that can follow a route, avoid obstacles, signal a hazard, and process and store data. In fact, it is not easy to simulate the actions of a human driver.

Several technologies are needed to enable a vehicle to drive autonomously. Here are the main ones:

Factory use of self-driving vehicles

Enabling a car to move autonomously in an urban context of traffic, pedestrians, and unpredictable events is not easy. In fact, many road rules populate the Highway Code. Far simpler is the placement of self-driving vehicles in factories reserved for logistics. Places where spaces are more manageable and movements are fixed and predictable.

That’s why, in many large manufacturing realities, Automated Guided Vehicles (AGVs) made their entrance as early as the first decade of 2000, and today, with Industry 4.0, they offer a significant increase in the efficiency of departments where the movement of goods is a crucial element.

Yet, there is still resistance. Research by PWC found that the main barriers to the adoption of semi-autonomous and autonomous vehicles within industrial facilities are due to:

In fact, the management of self-driving vehicles, and especially their entry into already structured entities, requires significant changes in processes and warehouse organization for optimal, risk-free operation. Here’s an example. If we think of a plant where it is necessary to move goods near production machinery with workers in motion, it will be necessary to design dedicated routes. This is the only way to prevent AGVs from obstructing the passage of workers or vice versa, creating hazardous conditions. Also essential are the skills needed to manage and include self-driving vehicles in processes properly.

However, such changes are significantly easier in structured and controlled settings such as industrial plants where the rules are internal. On the other hand, for self-driving cars, trucks, and transportation vehicles, we will have to wait for changes in infrastructure and the Highway Code that will take longer to adapt. Moreover, it is worth highlighting also the delicate and important issue of civil liability that would arise from the circulation of self-driving cars. 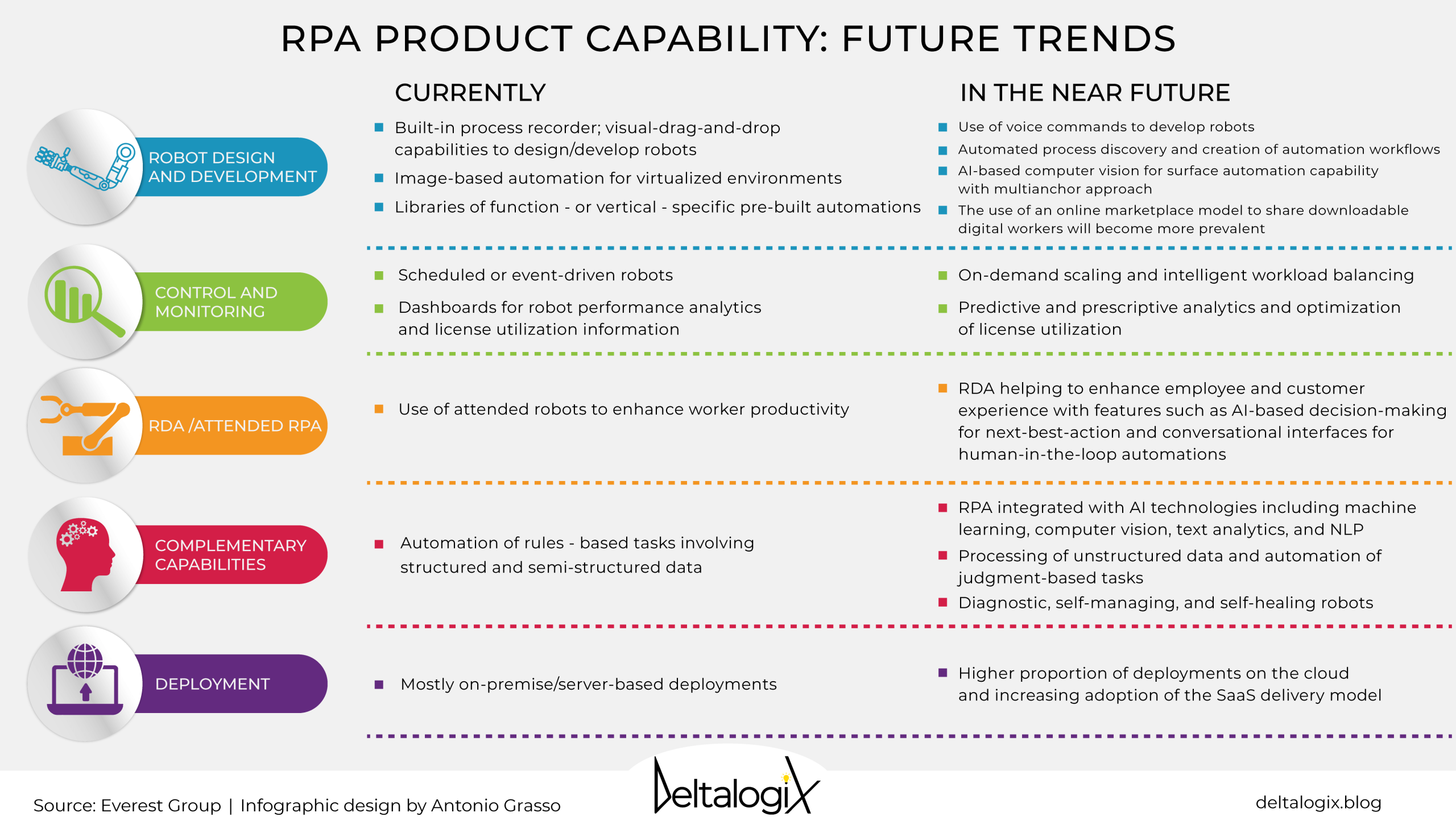 RPA: What will be the future trends in enterprise automation? 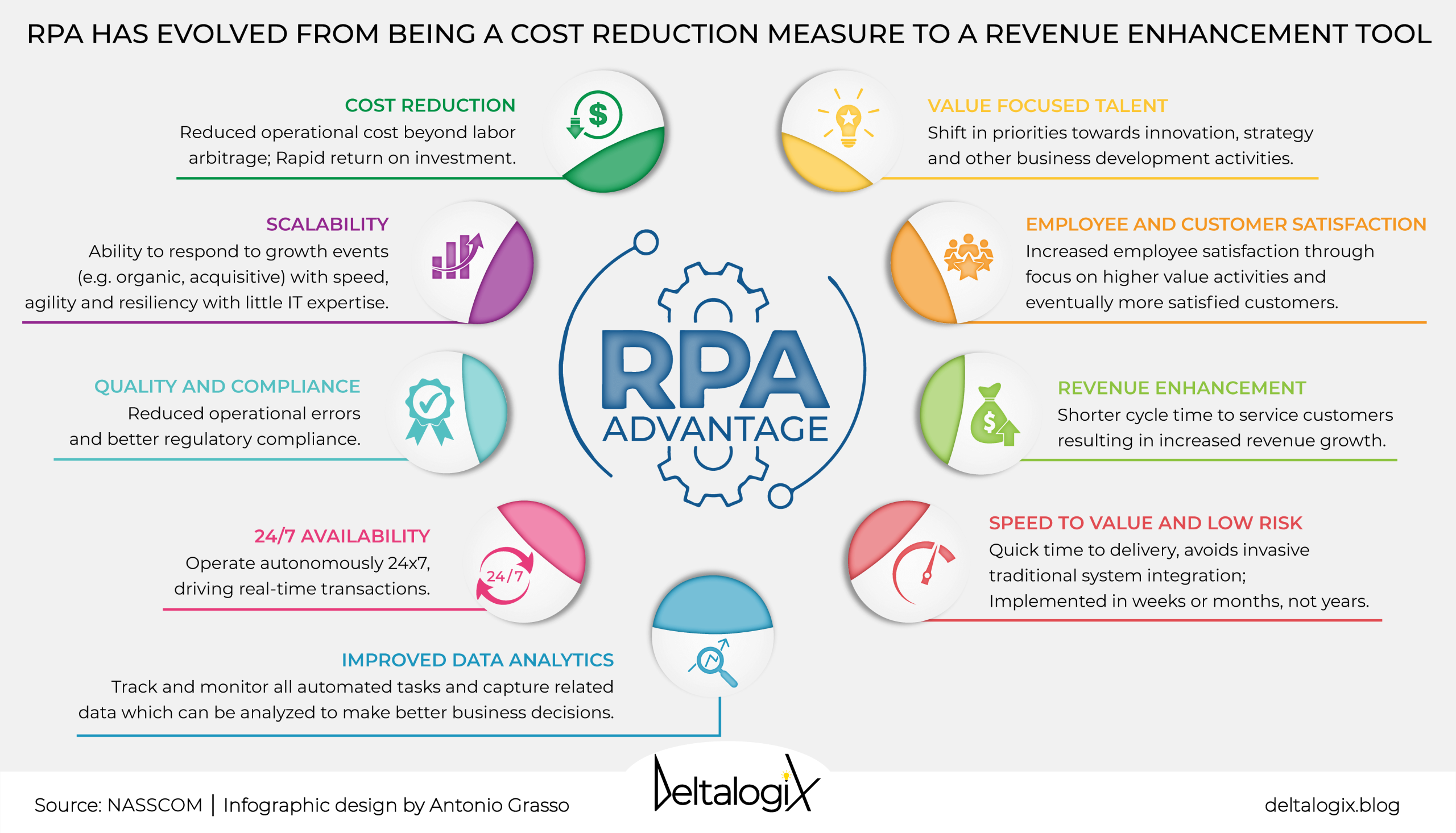 Advanced Robotic Process Automation: how the advantages for companies are growing