Smart devices that connect to the internet, such as televisions, watches, cameras, and thermostats, are part of our everyday lives that we can no longer do without them. Not only that, we often don’t even notice their presence and the risks related to privacy and security. Dangerous threats in private life that generate even worse damage in business contexts. That’s why this in-depth look at the hidden shadows of IoT devices is useful.

What is Shadow IoT?

IT experts will have already heard of “Shadow IT,” or the connection of hardware or software devices to enterprise IT systems without authorization. Shadow IoT is nothing more than an evolution of it: that is, it is IoT devices or sensors that are connected to the network without receiving formal authorization from the IT department. Thus, circumventing useful security controls prevents unwanted access to the corporate network.

Here’s an example. If I buy a Smart TV and connect it to the company’s wifi without asking permission from the IT department, I expose the company to high risk. Maybe I do it in good faith, as I reason about its use and not the hypothetical risks of an IoT device connected to the network. I think, “I need it in the boardroom to show slides and videos; there’s no risk.” And instead, a hacker could turn the device into a microphone and listen to or record the entire meeting. But also use the Smart TV as an access point to the corporate network. The result: if the topic discussed during the meeting is sensitive, it could generate a leak that would harm the company and employees.

IoT devices: which ones could hurt your business?

Whenever a device is connected to the network in the company, be it a PC, a printer, a thermostat, or a smart fridge in the canteen room, it should be authorized by the IT department. Reporting the presence of a new device on the network serves to initiate controls that verify the design security of the device but also the parameters and accesses used to connect to the corporate network.

When there were only a few devices to connect, the problem related to permissions was not relevant. With IoT devices that are numerically larger and often in personal use, reporting has become more formally complex and difficult to monitor.

But what are these IoT devices that could threaten the enterprise? 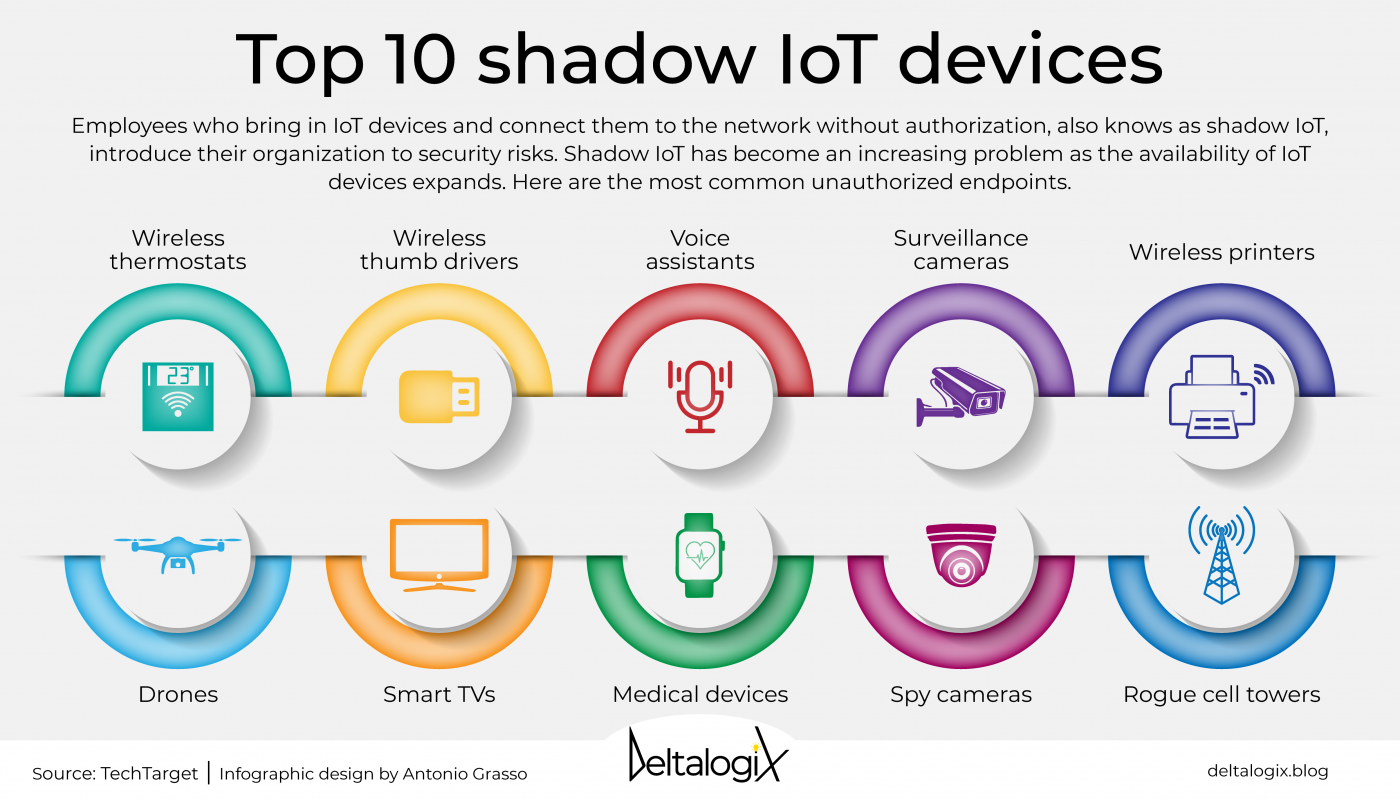 What are the risks of Shadow IoT?

It’s not easy, and in some cases impossible, to monitor all the IoT devices that connect to the corporate network. The number is constantly growing between objects for personal use and corporate devices.

Moreover, thanks to increasingly intuitive and straightforward apps, even configuration is within everyone’s reach. Before, when you needed to connect a device to the network or simply configure it, you had to call the IT department because you needed advanced skills to do it. However, self-installing programs start up at power-up, making the process a breeze.

So, instead of starting the procedure for authorizing the device’s connection and waiting for the IT department to be available, we proceed on our own, convinced that we will not cause any damage if, for example, we connect our smartwatch to the company wifi. Instead, even the most trivial device can become a gateway for malicious users.

What can I do once I enter the corporate network via a smartwatch? Cause exactly the same damage as any compromise made, for example, through a PC:

Why, specifically, are IoT devices so dangerous? Because of the attention paid to security in the design phase of devices. When they are dated or very inexpensive, the devices do not undergo vulnerability identification and elimination and do not have specific cybersecurity features. Also, we often associate IDs and passwords that are easy to decrypt with the devices we use in our free time, making them preferred network access points over more complex devices.

Shadow IoT is the connection of IoT devices to the corporate network without requesting permission. One practice puts the entire organization's data and security at risk Click To Tweet

How to counter the Shadow IoT and protect the enterprise network?

Before even requesting the intervention of the IT department, it is useful to dwell on the process of authorizing the connection of IoT devices. Often, these procedures in the enterprise require steps through multiple departments, significantly extending the time between the request and the actual connection of the device.

If I need to connect my personal tablet to the network to make my work more efficient, I expect a few hours to do so. On the other hand, if the authorization email has to go through several formal approval steps and IT department checks, it will obviously take days or even weeks. Instead, establishing a rapid IoT approval protocol would not only streamline the process it would also be a great incentive for employees who would not be taking unnecessary risks in the face of quick steps.

Let’s turn now to the technical side. Cyber security experts recommend focusing on connections and devices by favoring an end-to-end approach in which control operations are performed at properly protected end nodes (or endpoints).

The IT department, to counter the risks associated with IoT connections on the corporate network, should:

What features should IoT devices possess to reduce the risk of unwanted access?

IoT devices should be:

The organization, on the other hand, should train employees so they know how to properly set up credentials, create IDs and passwords that are secure, and enable two-factor authentication for added security.

Overall, the only way to improve security related to IoT devices is a shared commitment from everyone involved in the process: manufacturers, regulators, enterprises, and employees. 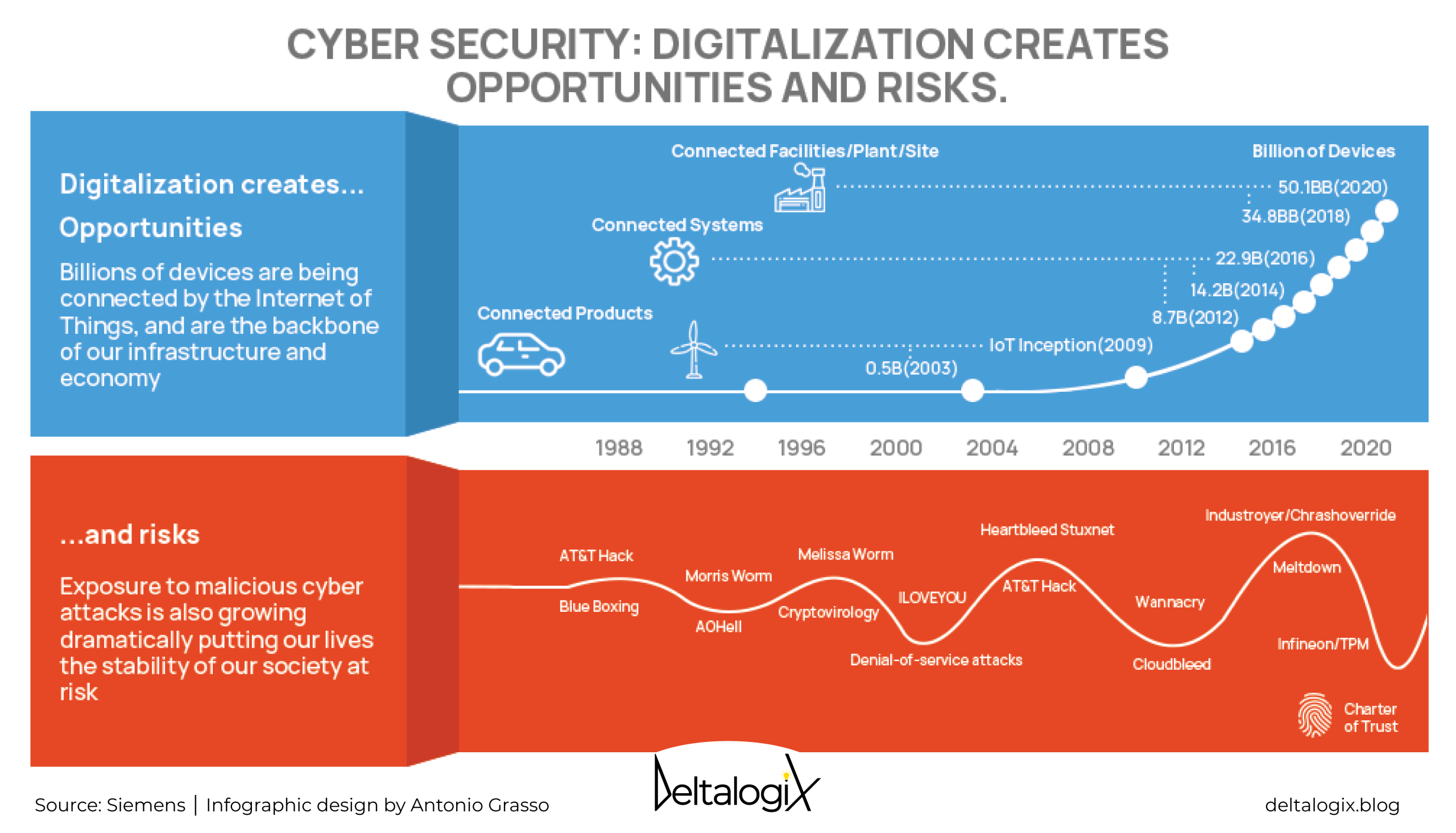 Cyber Security: the opportunity and risks of digitalization 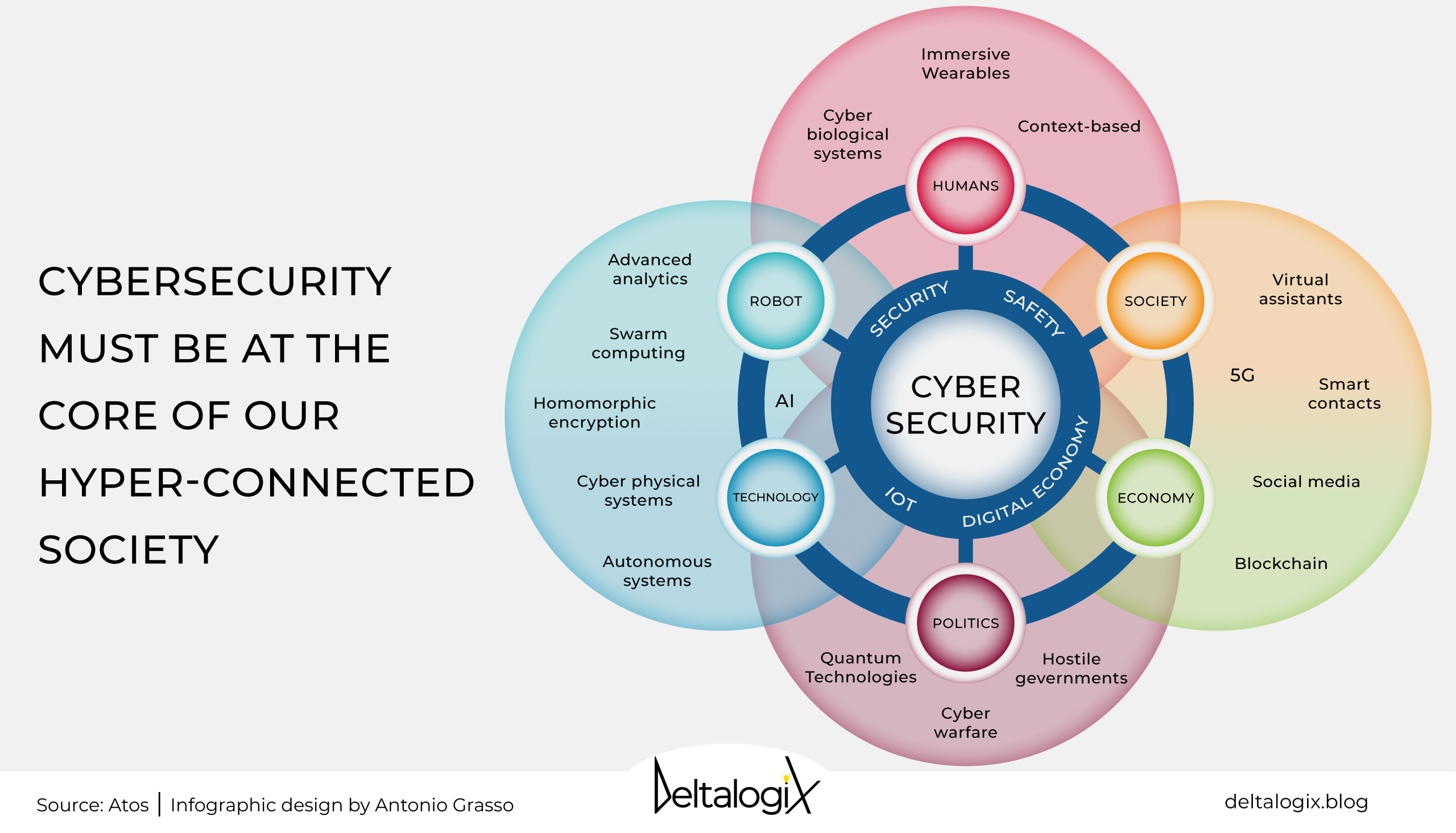 How to protect your digital identity in a hyper-connected society