Renewable hydrogen – which is commonly known as “green hydrogen” – carries a respectable value proposition. Not only does it offer all the benefits of renewable energy to stalled sectors like shipping, rail, aviation, and heavy industry, it could enable European countries to break free of their dependence on foreign energy suppliers.

What is green hydrogen and how is it produced?

Even a quick scan of the Periodic Table reveals the prominent role that hydrogen plays. As the first element on the list, it has the atomic number 1 – indicating the presence of one proton within the atomic nucleus. Yet, despite the fact that it is the most common substance in the universe, hydrogen does not exist in a “pure” form, but rather must be extracted from its compounds. Derived from the ancient Greek word húdōr (“water”) combined with the root -ghen (“to generate”), the literal meaning of hydrogen is “generator of water.”

For our purposes here, there are four main types of hydrogen that I want to discuss:

Finally, the emerging decarbonization option, turquoise hydrogen, is generated by pyrolysis. Even though methane is used during the process, the carbon byproduct remains in a solid state and does not pollute the air.

For a nice visual summary of these differences in production methods and related adoption processes for the green hydrogen in energy-stalled sectors, take a look at the infographic below: 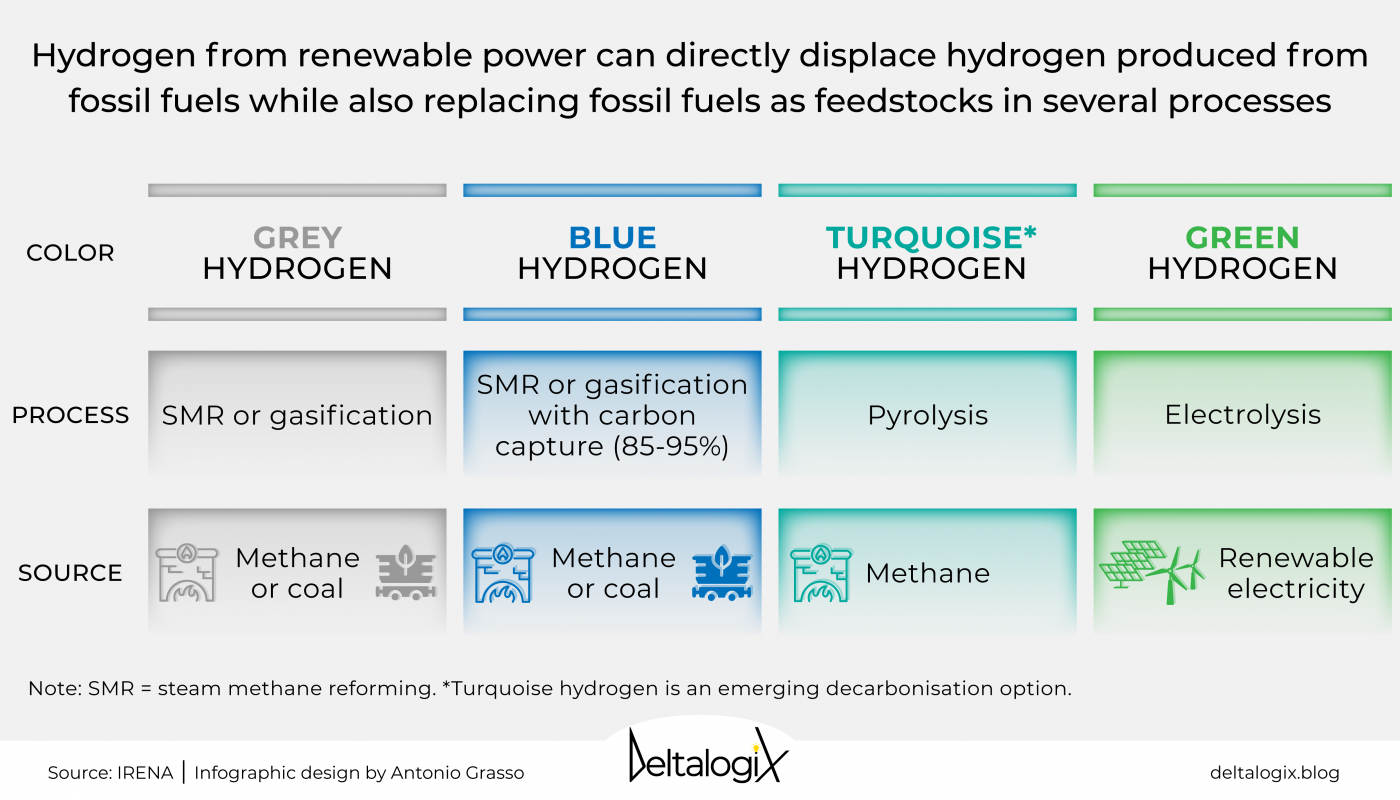 For science geeks, like me, it’s fascinating to consider hydrogen, not as an energy source, but as an energy carrier that takes the form of a gas. Energy is first stored in a chemical form and then released at a later time. Since this energy can be compressed in high-pressure tanks, it can either be held or transported.

When combined with fuel cells, the stored energy can be released directly in battery form. Hydrogen can also be used to balance the grid. When wind and photovoltaic power plants are performing at their peak – i.e., producing more energy than required – the excess can be used to produce hydrogen. Conversely, in the absence of sun or wind, the stored hydrogen can be converted back into electricity to compensate for temporary shortages.

(It is worth noting that hydrogen internal combustion engines cannot be considered zero-emission. Although combustion does not generate carbon dioxide per se, it does produce nitrogen oxides that are pollutants.)

Green hydrogen: the future of transportation and heavy industry

For decades, the largest carbon dioxide emitters have been taken to task over their environmentally devastating practices. While the industrial sector accounts for 30 percent of emissions and 37 percent of the world’s total energy consumption (as per the World Economic Forum), transportation is responsible for one-fifth of global carbon dioxide emissions. With the exception of trains, these sectors are almost entirely dependent on fossil fuels; only 38% of the supply is generated from clean energy sources. In fact, ships are such heavy polluters that governments have mandated the use of lower-impact fossil fuels as they approach coastlines.

Granted, heavy transporters cannot run on batteries, because of their excessive weight, the amount of energy they require, and recharging times. We need only imagine a container ship with one-third of the space unavailable and the prolonged wait times to see that the disadvantages would clearly outweigh the benefits. Yet, irrespective of our reliance on these sectors, we cannot continue to ignore the fact that they are the greatest sources of greenhouse gas emissions.

The question becomes: How can green hydrogen improve the transportation sector? With respect to cars, our current infrastructure and the light weight of batteries make electricity the most viable solution. Ships, trains, and trucks, on the other hand, would benefit from green hydrogen. The same applies to heavy industry, where energy consumption is at an all-time high. Currently, natural gas or electricity is used to fuel operations, which is greener but only to a limited extent.

Unsurprisingly, it is a major challenge to reduce CO2 in factories, one that requires the use of new technologies and redesigning flows and processes to support green hydrogen. Consistent with this, the European Commission launched the H2Future project, which aims to facilitate decarbonization through the use of green hydrogen. Although it is still in the research phase, I believe that this project is moving in the right direction. 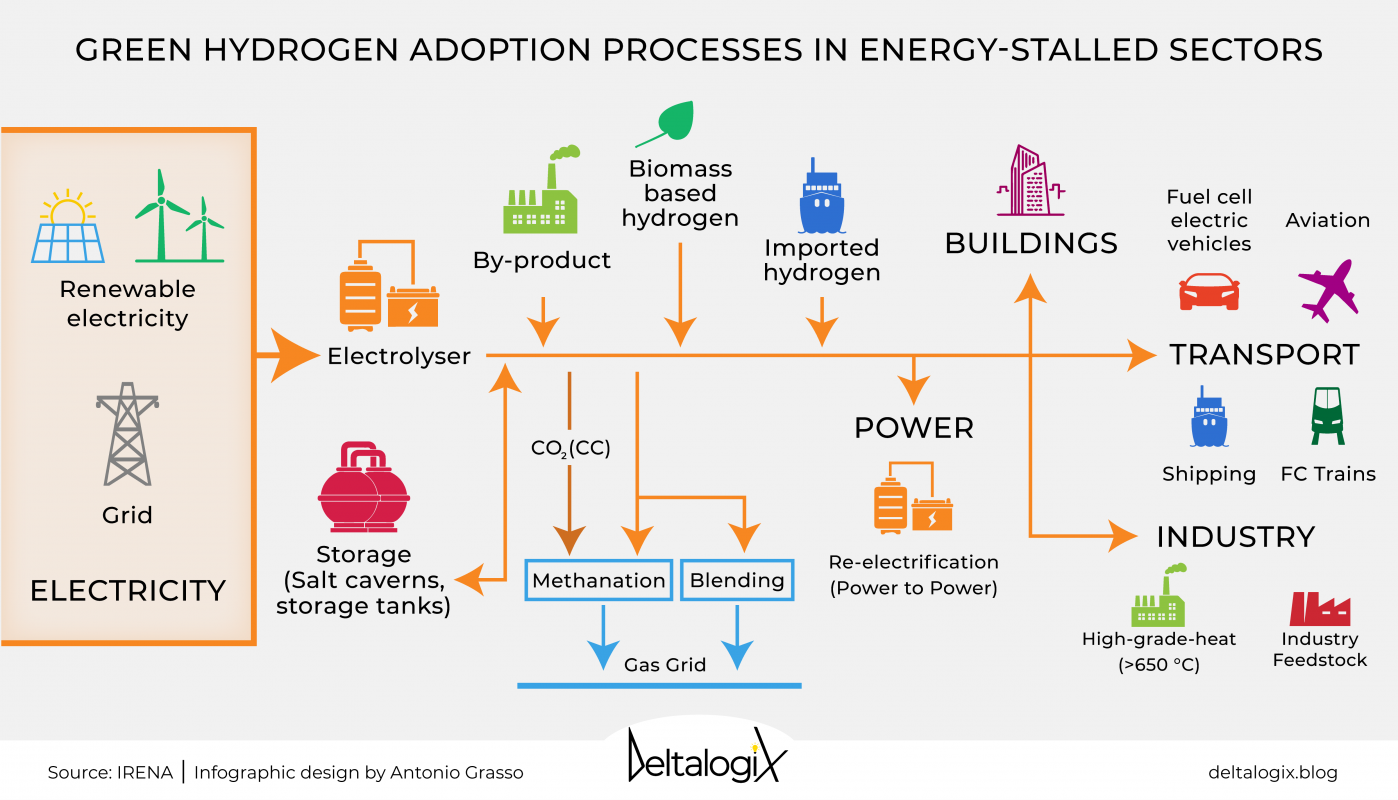 The transition to renewables

One of the major logistical barriers of transitioning to renewables is geophysical. The reality is that you cannot install wind turbines just anywhere, or a photovoltaic plant in an area that does not get much sun. It is completely unrealistic to think that we can simply exchange coal-fired plants with renewable ones. Beyond location, we have to account for the facilities that are required to transport energy from the production site to the consumption site (this includes distance and transport modes, with possible losses and critical infrastructure).

These technical issues are further compounded by the need to satisfy public opinion and ensure that local residents support these measures. If history has shown us anything, it is that these political hurdles could result in slowdowns to plant construction, if not grind them to a halt with a change in political party.

The bottom line is that transforming the energy sector requires complex and thorough feasibility studies. Among the proposed solutions is combining the transmission of electricity with green hydrogen produced near renewable energy plants, and then transporting it by hydrogen-powered trucks or through underground pipelines. A similar proposal was presented by Snam – a company that is run by the Italian State through the investment bank, Cassa Depositi e Prestiti. Their goal is to make use of the existing infrastructure that was built to transport methane but to convert it into hydrogen.

Hydrogen: the path to energy independence

At the time of writing, the Ukrainian war is ongoing, and it would be imprudent to make projections based on the current context. What I will say is that one of the greatest benefits of green hydrogen is that it could break Europe’s dependence on foreign energy suppliers.

For more background context, when our country chose to give up on nuclear power, we took a major step back from energy independence. Although the reasons for this choice remain valid, particularly because the plants that were installed in neighboring countries failed to mitigate risks, we gave up the benefits without protecting ourselves from the consequences.

I hope that, as a nation, we can learn from our past mistakes and that, when we emerge from the COVID-19 pandemic and broader conflicts, European leaders evaluate the strategic needs of each country by designing solutions that offer long-term benefits. In my view, including green hydrogen into the mix of sources and carriers is an important lever to accelerate our transition to a greener future.

Transportation and manufacturing produce a large share of global CO2 emissions. Reaping the benefits of Green Hydrogen in these sectors will require new technologies and the redesign of flows and processes. Click To Tweet

Hydrogen has lost the automotive battle but not the war

When it comes to electric vehicles, hydrogen may have lost the early battle, but it remains a strong contender for the future of fuel. Apart from the technical considerations mentioned above, manufacturers and bureaucrats have given little thought to what happens when battery-powered vehicles break down and those batteries must be disposed of. Although the materials used in batteries are largely recyclable, it is difficult to obtain global data on the percentage of lithium-ion batteries that are actually recycled (estimates suggest only 5%).

As manufacturers continue to look for ways to recycle copper and aluminum, it would be useful for politicians to establish a regulatory framework to curb, if not prevent, future pollution. My hope is that economic interests will not outweigh green solutions.

In the interests of full transparency and disclosure, it is important to speak to the main criticisms against green hydrogen. Nuance is key here. Often, when people talk about hydrogen, they fail to distinguish between the types and their associated environmental impacts. This runs the risk of viewing hydrogen as a pollution carrier when, if produced from renewable energy (as is the case with green hydrogen), it does not generate CO2.

I have also read critiques on production costs. There is no question that the costs are greater than the benefits in the initial phase, but that argument applies to all energy transitions. While the environmental benefits can be expected now, the cost savings will be seen in the future.

Additional pain points are tied to the safety of hydrogen storage and transportation. Undoubtedly, these issues are concerning, but, as with the other flammable materials we handle, careful analysis is required. Risk assessments should be used to design safe facilities and routes, not to create barriers to progress.

It is also worth mentioning the viewpoint of environmental organizations, which tend to compare green hydrogen that is produced through electrolysis with direct electrification through batteries. With our current technologies, the latter is more efficient, but the downside is significant: namely, the disposal of lithium batteries.

In my view, it is better to focus on finding the right mix of alternatives to fossil fuels without fossilizing (pun intended) on a single thought.

If I could be confident that lithium batteries are being properly disposed of or recycled without harming developing countries, I would say that the right choice has already been made for the automotive sector. But, in all honesty, I don’t feel confident with the data I have to work with.

For heavy industry and transportation, politicians should push for the adoption of green hydrogen while funding research to improve manufacturing processes. It may be that human ingenuity can streamline operations by making green hydrogen a viable alternative to direct electrification. But since we do not live in a perfect world, environmental sustainability will continue to be viewed as a tradeoff between our present economic interests and protecting future generations. No doubt, we will hear more about the benefits of electric cars for many years to come.

My modest proposal is that we think of green hydrogen as a way to transfer the benefits of renewables to stalled sectors. Not only would this fuel research, it would also enable us to find alternative solutions to persistent problems for us and those who will follow. 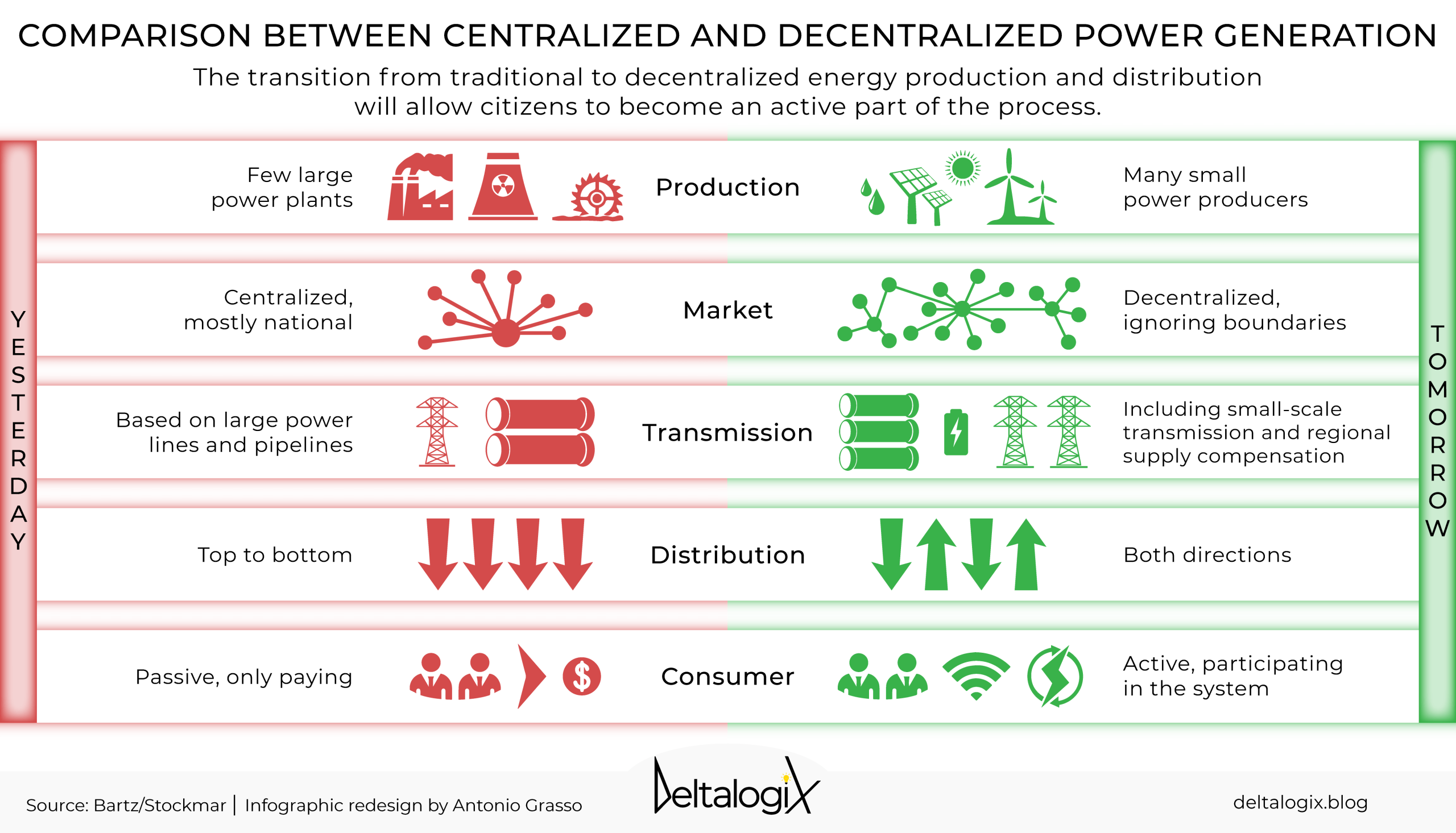 Energy Communities: How private citizens are saving the planet 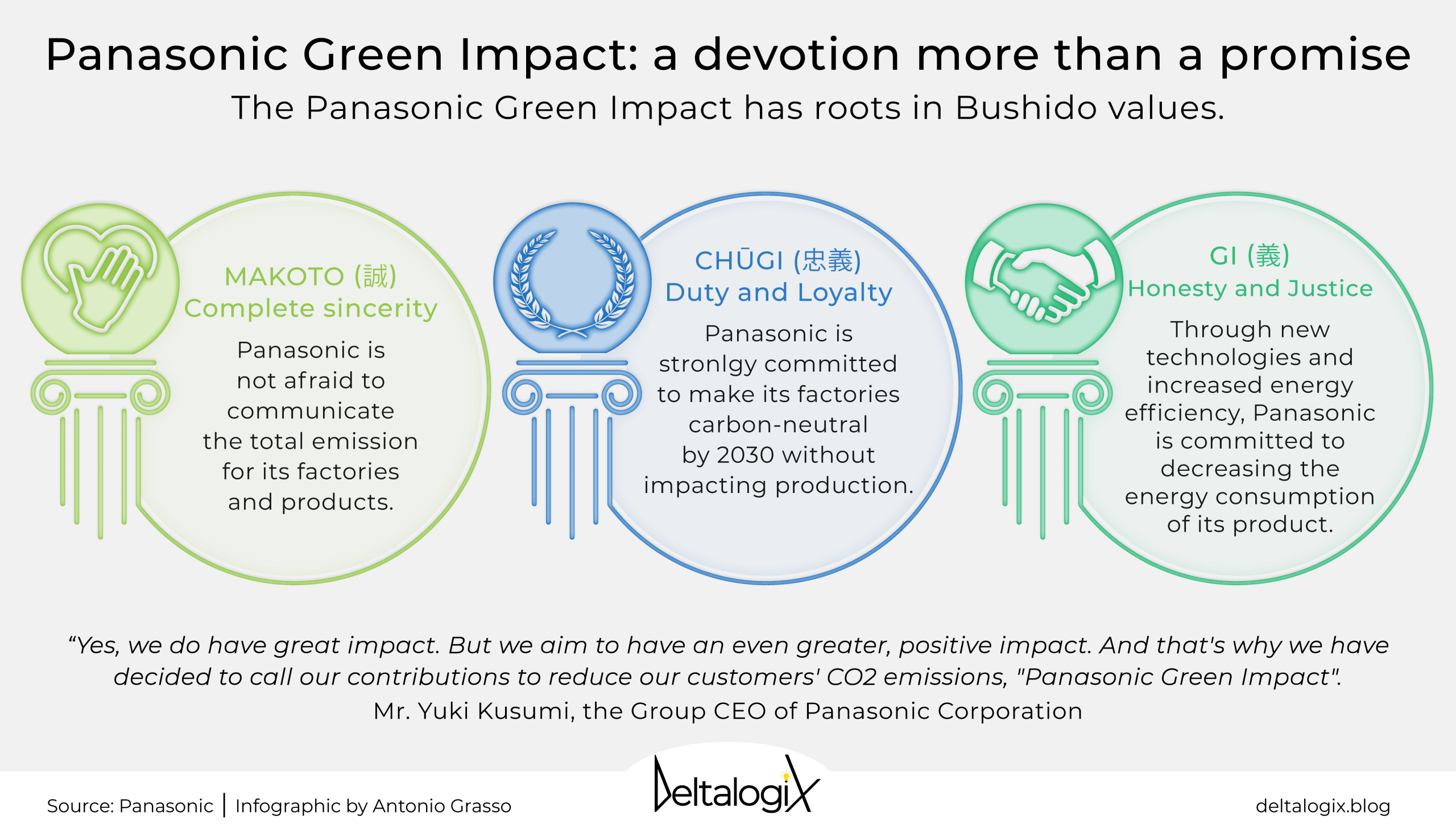 Panasonic’s Green Impact: More than a Commitment, a Dedication to the Future